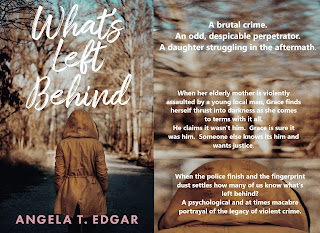 Fantastic News!
My debut novel “What’s Left Behind” will be published this coming May.

It follows the life of GRACE, an artist and gallery owner, in the immediate aftermath of a terrible crime against her elderly mother.  How will she get through this at the same time as her mum struggles through a mix of trauma and dementia?

Grace shows amazing courage laced with an overwhelming belief that there is always hope.  That's her better qualities.  But not so healthy is her obsession with finding out all she can about the perpetrator. He says it wasn't him;  Grace is sure it was him.  Someone else knows it was him and wants justice.  And what about Julian Brodie, the stranger who turns up at her gallery, enticing her into a relationship?  Will he help her get through this or is he just going to make matters worse?  Grace isn't in any emotional state to figure this out anyway as things for her are moving into somewhat murky territory.  There are the late night walks past the perpetrator’s house, sitting by a river at 3am and let’s not forget the nasty incident involving fresh road kill.

A modern literary annexe to the many crime novels that constantly grip us.  But when the police finish and the fingerprint dust settles, how many of us know What's Left Behind?

A psychological and at times macabre portrayal of the legacy of violent crime.

Watch this space, coming out in Paperback and Kindle.

What’s not to love, meeting these 3 fabulous authors!  Thank you for making me feel so welcome as I opened their main event.  Chuffed to bits. 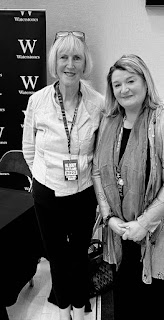 Angela T Edgar
I am a writer living and working in Scotland. "What's Left Behind" is my debut novel out in May 2022.